Joe’s media career started in 1998 when he started presenting on BBC Gardeners World and is currently part of the 2017 presenting team alongside Monty Don and Carol Klein. He has been a co-anchor of The RHS Chelsea flower show since 2001 and a regular on the BBC coverage of Hampton Court, Tatton Park and Malvern flower shows. Over the years Joe has presented many other programmes including ‘Small Town Gardens’, ‘Garden Makers’, ‘Open Gardens’, ‘The Flower Pot Gang’ with Anneka Rice and Phil Tufnell for BBC1 and ‘The Great Chelsea Garden Challenge’ as presenter and mentor. He has also been a guest on other random programmes including Celebrity Bake Off and Masterchef (no- he didn’t win, but his meringues were ‘superb’, said Paul Hollywood just before voting him off!).

Joe writes a weekly Saturday gardening column for The Times, The Radio Times, monthly for Gardeners World magazine and has had 3 books published.

Joe regularly gives talks on garden design, hosts awards ceremonies and gives after dinner speeches. In autumn 2016 he started his ‘A Man about the Garden’ World Tour in various venues. It’s a light-hearted evening where he shares stories of his Rock and Roll youth, behind the scenes of Gardening TV and just what it takes to win a Chelsea Gold

Joe occasionally teams up with good friends and garden designers Cleve West and James Alexander-Sinclair for horticultural fun, some of which is posted on YouTube. Click the Photo to visit the 3 men went to mow Youtube Channel. 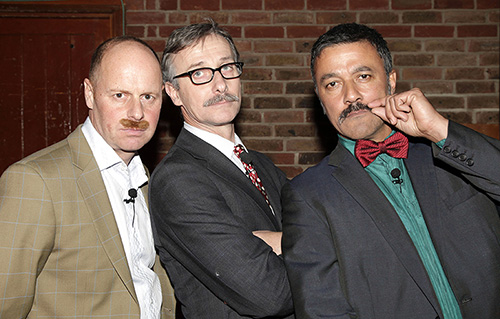